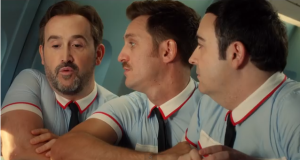 Written and directed by Pedro Almodóvar

Pedro Almodóvar’s Los amantes pasajeros/I’m So Excited is, on the surface, a comedic, drug-fuelled romp of a film, that for Paul Julian Smith ‘marks a much heralded return to the transgressive and corrosive comedies of Almodóvar’s early period’. Like the director’s early films, produced in the aftermath of the Movida madrileña, the hedonistic explosion of cultural and social activity that followed the death of Francisco Franco in 1975, the categorisation of Los amantes pasajeros within the comedy genre does not preclude its political significance. For the film constitutes not only a journey through personal, national, and imperial histories, but also a stark political comment on Spain’s current economic climate.

The film concerns the business-class passengers of an ill-fated Mexico-bound flight. An error with the landing gear means that the plane spends hours simply circling the skies above Toledo, Spain, with the passengers initially unaware of this. The pilot and his second are completely helpless. Meanwhile, the camp cabin crew indulge in the consumption of alcohol and various illegal substances as a means of coping with this unexpected situation, before attempting to distract the unsettled passengers with a lip-synched performance of the Pointer Sisters’ ‘I’m So Excited’ (the inspiration for the film’s English title, and by far, at least in my opinion, its funniest sequence). The revelation of the flight’s impending peril is accompanied by further revelations amongst the crew and passengers, whose inhibitions are lowered by the mescaline laced ‘Agua de Valencia’ cocktail prepared for them by the air stewards. The ensuing frank and open discussions lead to equally intimate corporeal encounters between those on board. At the film’s conclusion, existing relationships are reinforced and new bonds cemented by the experiences undergone throughout the flight. Over and above its recuperation of the 1980s Almodóvarian spirit, Los amantes pasajeros contains several references, both implicit and explicit, to the director’s oeuvre. The film’s cast features a number of actors and actresses with whom Almodóvar has previously worked. These include: Cecilia Roth, who played the nymphomaniac Sexilia in Laberinto de pasiones/Labyrinth of Passions (1982) and Merche in Entre tinieblas/Dark Habits (1983) before her emotional performance as mourning mother Manuela in Todo sobre mi madre/All About My Mother (1999); Javier Cámara, who shone as malign nurse Benigno in Hable con ella/Talk to Her (2002); not to mention, the opening cameos from Almodóvarian favourites Antonio Banderas (Matador, 1986; La ley del deseo/Law of Desire, 1987; Mujeres al borde de un ataque de nervios/Women on the Verge of a Nervous Breakdown, 1988; ¡Átame!/Tie Me Up! Tie Me Down!, 1990; and La piel que habito/The Skin I Live In, 2011) and Penélope Cruz (Volver, 2006 and Los abrazos rotos/Broken Embraces, 2008). Furthermore, and as Paul Julian Smith has pointed out, the film echoes the director’s ‘personal and professional history’, for example through the backstory of Roth’s character, who relocated to Spain from Argentina in the 1970s; the suicide attempt on a Madrid viaduct that featured in Matador; and the frequent recourse to telephones, reminiscent of the director’s most famous and successful comedy Mujeres al borde de un ataque de nervios/Women on the Verge of a Nervous Breakdown (Paul Julian Smith).

Beyond its tracing of the personal past of Almodóvar’s body of work, Los amantes pasajeros also evokes national and imperial histories. Spain’s political past, in particular the transition from dictatorship to democracy following the death of Franco in 1975, is implicitly referenced by air steward Joserra (Cámara), who describes a traumatic event, that inspired a ‘Pacto de Silencio’ (‘Pact of Silence’) – a term that recalls the rhetoric surrounding the political disavowal of the past in democratic Spain – and which rendered him unable to tell a lie. This is supported by further references to the ‘destape’ (‘uncovering’), a term used to refer to the relaxed attitudes to (mainly female) nudity in cultural production of the immediate post-Franco period, and to Interviu, a publication of this particular era that participated in this cultural phenomenon. In addition, despite the fact that most of the narrative is set within the confines of an aeroplane circling the skies above Toledo, the film’s geographical span encompasses the regions of Andalusia, through the exaggerated accents performed by Banderas and Cruz in the film’s opening sequence; Valencia, through the close-up of a newspaper article concerning the corrupt and controversial airport in Castellón; and Almodóvar’s native La Mancha, which provides the location for the plane’s emergency landing at the film’s conclusion. This geographical reach extends to the country’s imperial past through various links with Latin America: the flight is bound for Mexico, and some of the passengers hail from Argentina (Roth’s character Norma Boss) and Mexico (Señor Infante, played by José María Yazpik). Moreover, the object of psychic Bruna’s affections, Nasser (listed on IMDB as ‘Joven étnico’ (‘Ethnic youth’)), gestures towards Spain’s contemporary demographics, as well as its past relationships with North Africa.

The character of Nasser is not the only reference to the situation in contemporary Spain. The aforementioned allusion to the Castellón airport scandal is further emphasised by the still shots of the deserted La Mancha airport at the film’s conclusion, given that the Valencian site, since its inauguration in 2011, has not received a single flight. The character of Señor Más (José Luis Torrijo), the head of bank Caja Guardiana, who is situated at the centre of an undisclosed crisis, evokes the many financial and economic scandals to have gripped the country of late, the most recent of which is the Infanta Cristina’s tax evasion. Against this solemn backdrop, the laughs of Los amantes pasajeros provide much-required light relief, while not shying away from the sticky circumstances facing contemporary Spain. The fact that Daniel Sánchez Arévalo’s comedy La gran familia española/Family United has the most nominations (11) at this year’s Goyas underscores this need to laugh which is manifesting itself in contemporary Spanish cinema.

Fiona Noble is working towards the completion of her PhD thesis, entitled ‘Contemporary Spanish Cinema: Childhood, Performance, and Immigration’, at the University of Aberdeen, where she is currently a Teaching Fellow in the Department of Film and Visual Culture. She writes the blog ‘Spanish Cinephilia’