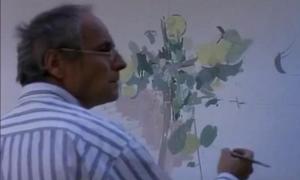 Víctor Erice’s film El sol del membrillo (1992) introduces us to the difficult and complex world of art and more specifically that of painting. This is not the first time that Víctor Erice has used the artistic world as the basis for one of his films – allusions to painters such as Jan Vermeer, Velázquez, Rembrandt or Edward Hopper are obvious in his previous films El espíritu de la colmena (Spirit of the beehive, 1973) and El Sur (1983). It is perhaps in El sol del membrillo however where he carries out a more interesting examination of a painting’s creation and development.

The film follows the excellent realist painter Antonio López, who plays himself, while attempting to capture autumn’s light reflected on an old quince tree that he planted in the back garden of his studio many years ago. Over the years, severe weather and other difficulties have prevented the artist from bringing his work to a satisfactory conclusion, forcing him to leave it unfinished. The viewer – who sees things from the artist’s point of view from the very outset – is then overwhelmed by a feeling of despondency caused by the impossibility of seeing the painting finished. We are left to understand and accept the inevitable when the painter leaves the incomplete canvas next to others that had previously undergone the same process. We soon understand that it is not the final outcome but rather the idea or the creative act itself that painting is fundamentally based on.

Erice’s film is not based on a specific script but neither is it an improvised fiction. It cannot be considered a documentary film that reflects the facts objectively either as the plot that the characters will follow has been established in advance. It could possibly be considered a tangible proof of the simple desire to be carried away by the events themselves – similar to Henri G. Clouzot’s Le mystère Picasso (The mystery of Picasso, 1955). This approach creates spontaneity coming from the characters that makes us forget there is a camera filming the whole process. The importance of the camera is nevertheless essential as it acts as a link between cinema and painting. The camera’s eye becomes the spectator’s and it enables us to contemplate both the model (the quince tree) and the represented object as it is, and as the painter feels it.In spite of everything, Antonio López fights a battle against the passing of time by trying to capture the impossible. And it is for this reason that he is inevitably defeated – the quince fruits that not so long ago shone in the sun are now withering on the floor. It is at that moment when the film makes us reflect on the transience of life and the essence of art, and it becomes a work comparable to those out of 17th century’s Baroque period: to be or not to be, that is the question.